Review of “Foreigner” By Kenneth Bowers,secretary of the NSA of the Baha’is of U.S.A 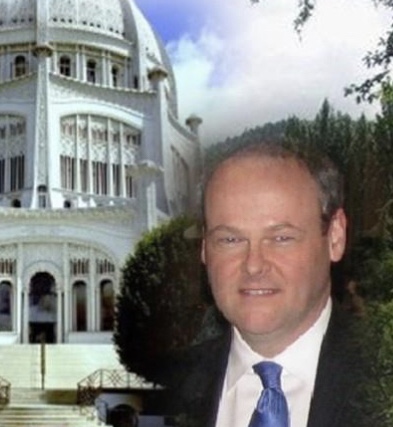 The “immigrant story” has extended from the Colonial era to the present day, and has long constituted an American literary archetype. The histories of the famous and of the obscure are a genre all their own, following a typical narrative arc: adversity in the country of origin, continued struggle upon entering the Promised Land, and finally – thanks to an alchemy of plucky determination and freedom of opportunity – successful entrance into the mainstream. For the new citizen, at last sitting in triumph beneath his proverbial vine and fig tree, America has truly become “home.”
These universal elements are perhaps too satisfying for American readers, tempting us into an unquestioning sense of cultural superiority. But in the particulars, if we are fortunate enough to have an honest narrator, we can see ourselves as others see us. In this way we can better appreciate that the “idea” of America is a horizon towards which we are continually struggling, and that the struggle itself – towards true justice and equality – is our real story. And it is one we have in common with all of humanity.
It is in this respect that Hussein Ahdieh has rendered a notable service. He is born in Nayriz, a small town in southern Iran, to a family who trace their membership in the Bahá’í Faith, and its predecessor the Babi Faith, back to its founding years in the mid-nineteenth century. This heritage places him in conflict with a society suffused with religious bigotry and superstition. He learns from the stories of his ancestors, together with the example of his living relatives and other Bahá’ís, the qualities of steadfast devotion and courage which will serve him well in years to come. Moreover, the experience instills in him a keen sense of social justice and a yearning for freedom from the restrictions that bounded him at every turn.
He eventually obtains the means to travel to America in search of new opportunities. In terms both bittersweet and humorous, Ahdieh describes his struggle to navigate a bewildering new environment. In the process, his youthful experiences in Iran prove a surprising source of strength and moral direction. Encountering American society at the height of the Civil Rights era, he finds himself identifying with the struggles of those who, like the Bahá’ís of Iran, did not enjoy the full and unfettered benefits of citizenship. Far from seeking to insulate himself, his response is to join with others in establishing Harlem Prep as a means of providing badly needed educational services among African Americans. This experience sets the course for the years to come. Later, he and his wife make significant contributions in other arenas, not least in raising children who have carried on the ideal of service to humanity.
The reader is struck by Ahdieh’s candid and clear-eyed assessment of both the merits and faults of the two cultures he knows so well. One is moved by his sincere love for both his native country and his adopted one, and his faith that each will eventually attain the goals of true justice and prosperity. Above all, one recognizes in the particulars of his life the universal aspirations of humanity, and is reaffirmed in the belief that we can make a better world.
Hussein Ahdieh’s story, rendered in an engaging style with the able assistance of Hillary Chapman, now joins the great tradition of those who came to America in search of a better life for themselves, and whose contributions have enriched us all. At a time when fear of the “other” permeates our national discourse, it is a story worth knowing.